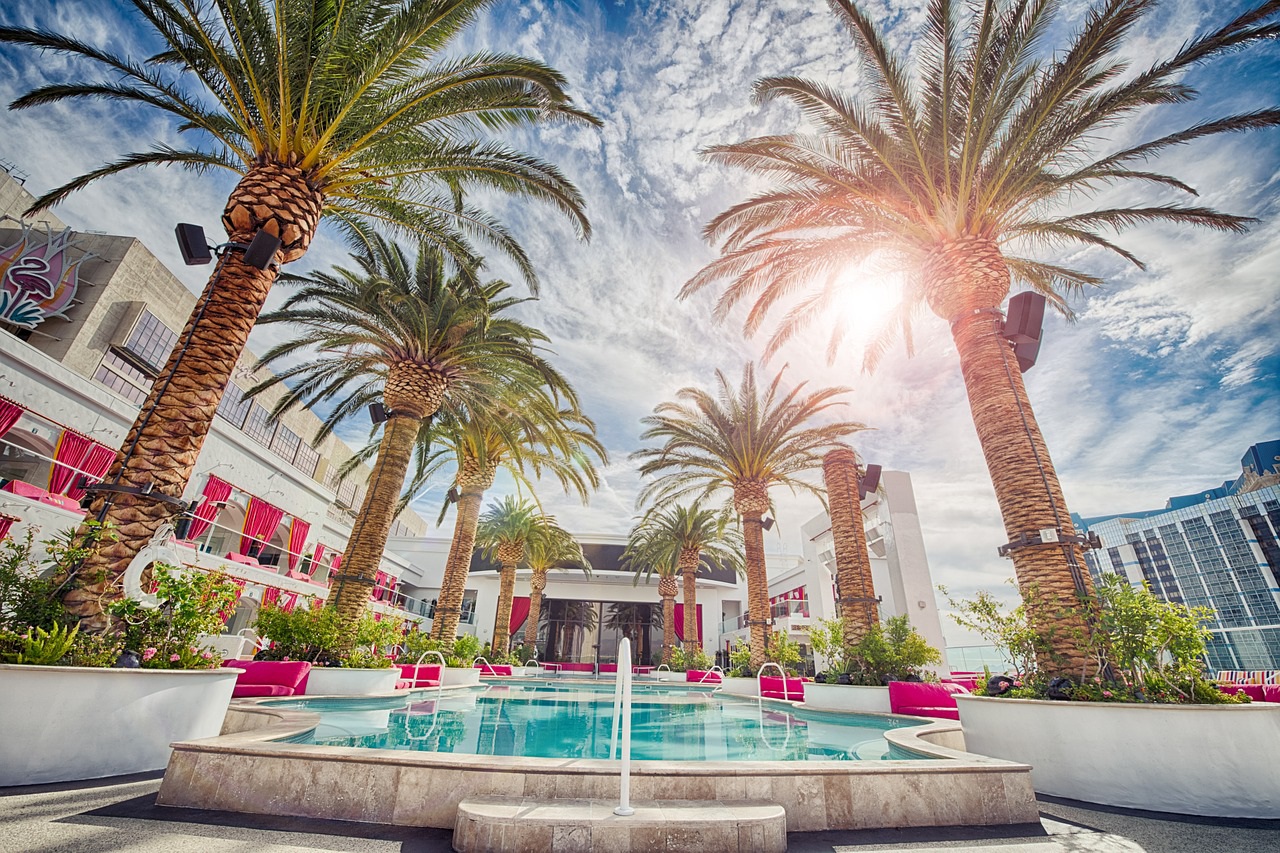 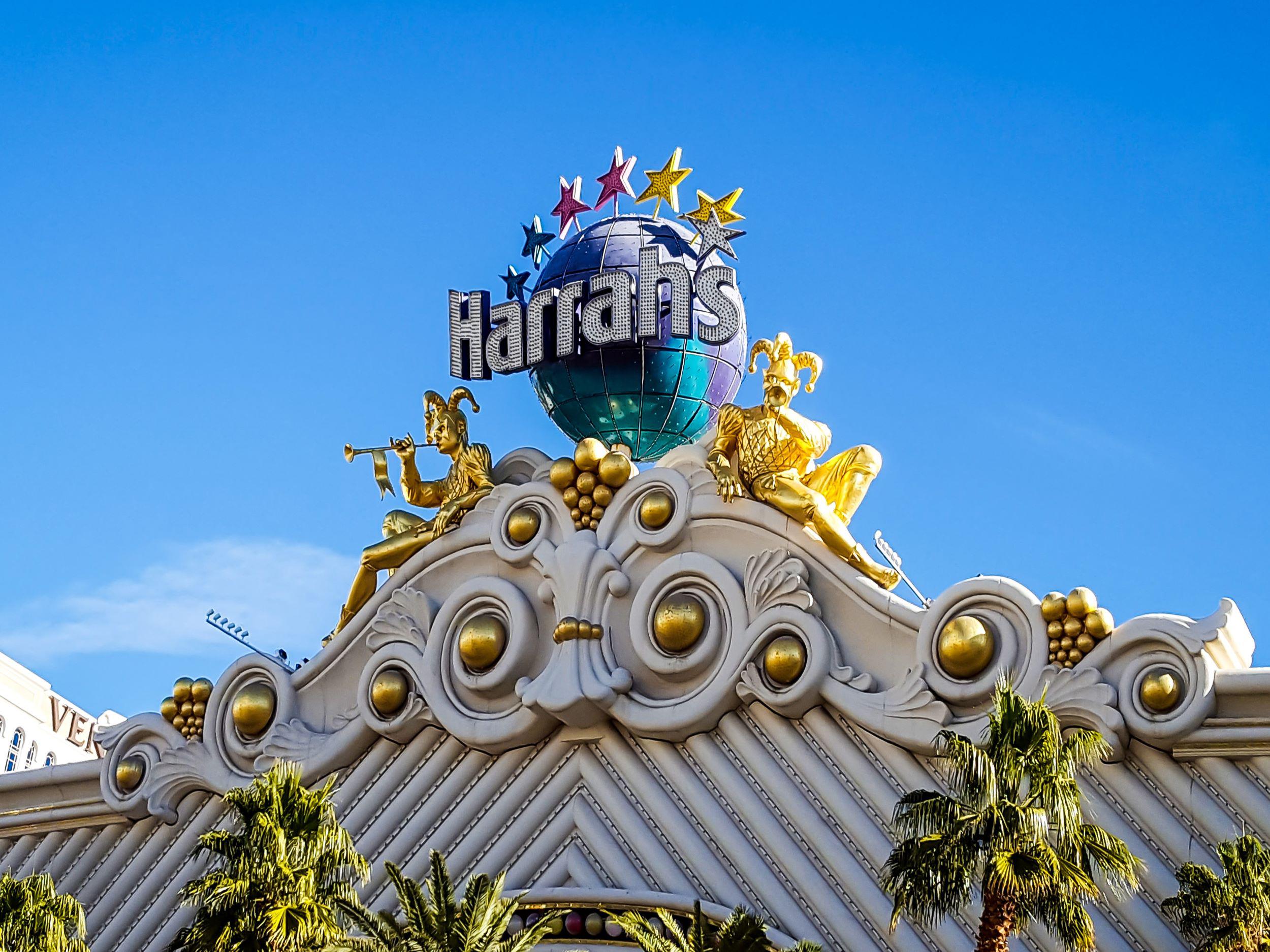 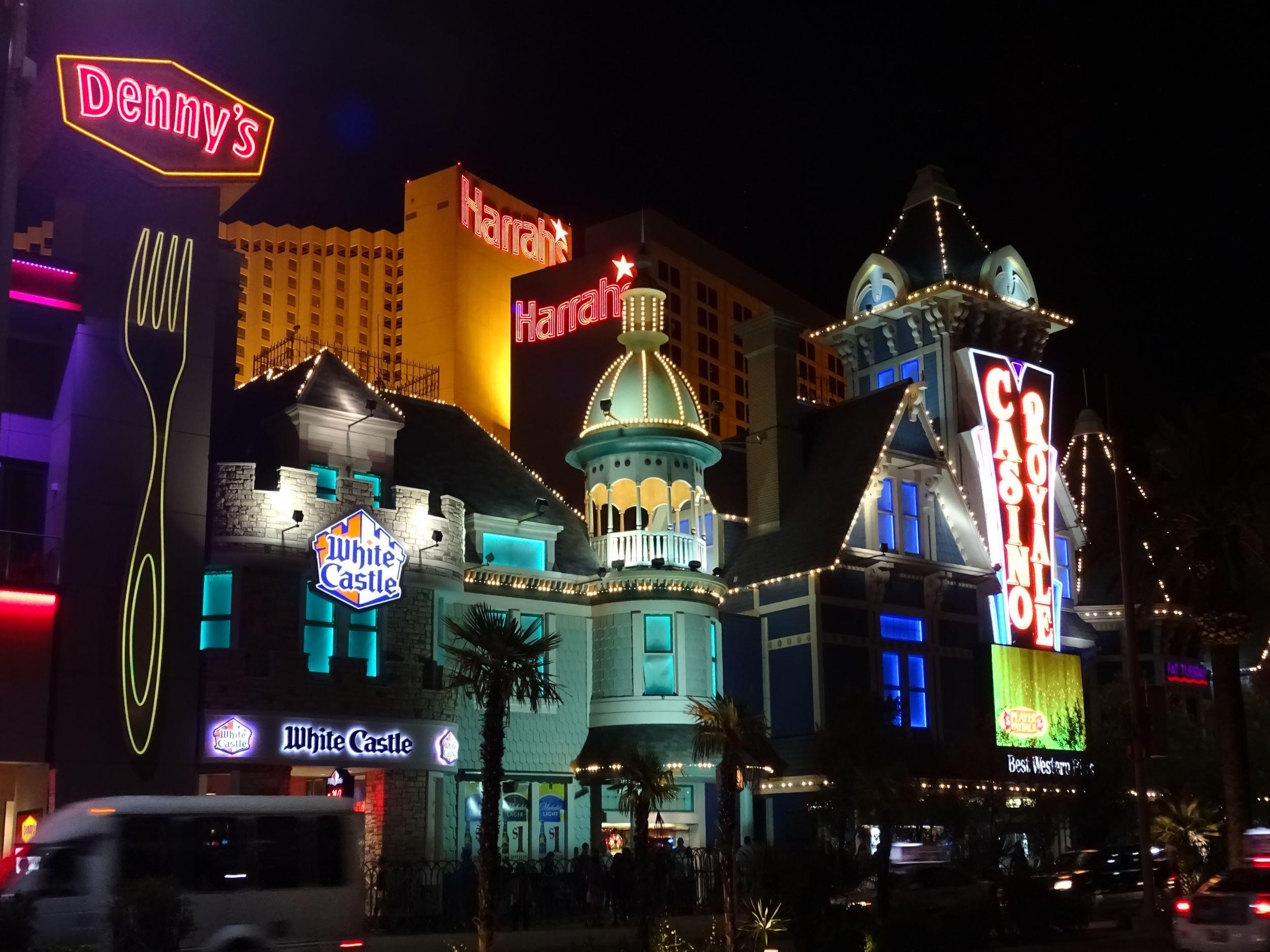 Opened in 1973 by Harrah's Entertainment Group as "Holiday Casino", centrally located on the Strip, in front of Caesar’s Palace Hotels, the Harrah’s Hotel with the large harlequin in front of its entrance, embodies the theme Carnival.

Located next to the Flamingo and Venetian Hotel and with a direct entry point to the electronic monorail train, it forms a central point on the Las Vegas Strip.
Harrah's Entertainment Group moved into Caesar's Entertainment Group in 2006, with all its resorts, which is why the Harrah's Hotel, like the Flamingo Hotel and many others, are now part of Caesar's Group.
All the benefits of Caesar's Rewards, as well as the Players Club of the same name, can be used in this resort as well as in its sister hotels.
2,530 recently renovated rooms and suites, in purple and blue tones with creamy colours and dark wood accents, available as non-smokers or smoking rooms, are offered to the guests at excellent reasonable prices.

As usual in Vegas gambling and entertainment are in the foreground!
On more than 64,470 sq ft gaming space, slot machines with recurring slot tournaments, a Keno lounge, gaming tables of each kind and sports betting are presented.
Here you will also find the famous statues of Buck and Winnie Greenback, which symbolize the absolute Las Vegas winning couple in colourful and glittering implementation in the middle of the casino and represent a very popular photo motif.
Instead of entering one of the city's countless artificial lakes and fountains, guests throw their "coins" between the both statues to make Fortuna favorable and express wishes.
A variety of restaurants of every cuisine, lively bars and shows have been integrated in and around the casino floor.
Starting with the Fulton Street Food Hall, a market place run by chefs, as a smart alternative to the standard food court, which serves a variety of freshly prepared food 24/7.
The Buffet Flavors with live cooking stations, all-you-can-eat crab legs and Italian gelato is considered one of the most diverse buffets on the Las Vegas Strip.
Named after a song by country music superstar Toby Keith, the country bar Toby Kieth's "I love this Bar", combines live music from various acts with typical food specialties of the Southern states.
Important sporting events, such as NFL football games or the Superbowl in February, are also broadcast here in a suitable ambience.

The Carnaval Court, an outdoor area connected to the hotel, invites you to wild parties of different types day and night with changing DJs, live music and charismatic bartenders which make the preparation of the ordered cocktails an experience.
Next to this street bar, at the Piano Bar, Karaoke competitions, as in the New York, New York Hotel "Duelling Pianos", heat the audience and Elvis Impersonator bring the past glamour back to the strip.

A smaller pool area with reversing pool parties, as well as a spa area, are also part of Harrah`s Hotel.
However, for the guest of this hotel, the focus is not so much on relaxation, but on the entertainment and central location of the hotel on Las Vegas Boulevard.
With Menopause The Musical, the soul legends The Rightheous Brothers, the Mac King Comedy Show and other live entertainment acts, the house presents a wide range of different shows.
In the top location of the Strip and as a central stop of the Monorail, many other hotels and the amusement mile The LinQ are perfectly accessible from here.

Harrah’s Hotel offers visitors to Sin City's a variety entertainment in a central location and is ideal for guests who want to take advantage of this hotel as well as the benefits and amenities of the surrounding area.